In a per curiam opinion handed down April 24, 2015, the Texas Supreme Court holds that the Texas Citizens Participation Act (TCPA) does not require a communication be in public form to qualify for protection. Under the Act, a defendant in a defamation suit or similar action may move to dismiss a claim involving the exercise of the right to free speech upon a showing that the communication was made in connection with a matter of public concern, here involving the quality of medical care. The Supreme Court reversed the Texarkana Court of Appeal, which had found the TCPA inapplicable, and remanded to that court for further proceedings. 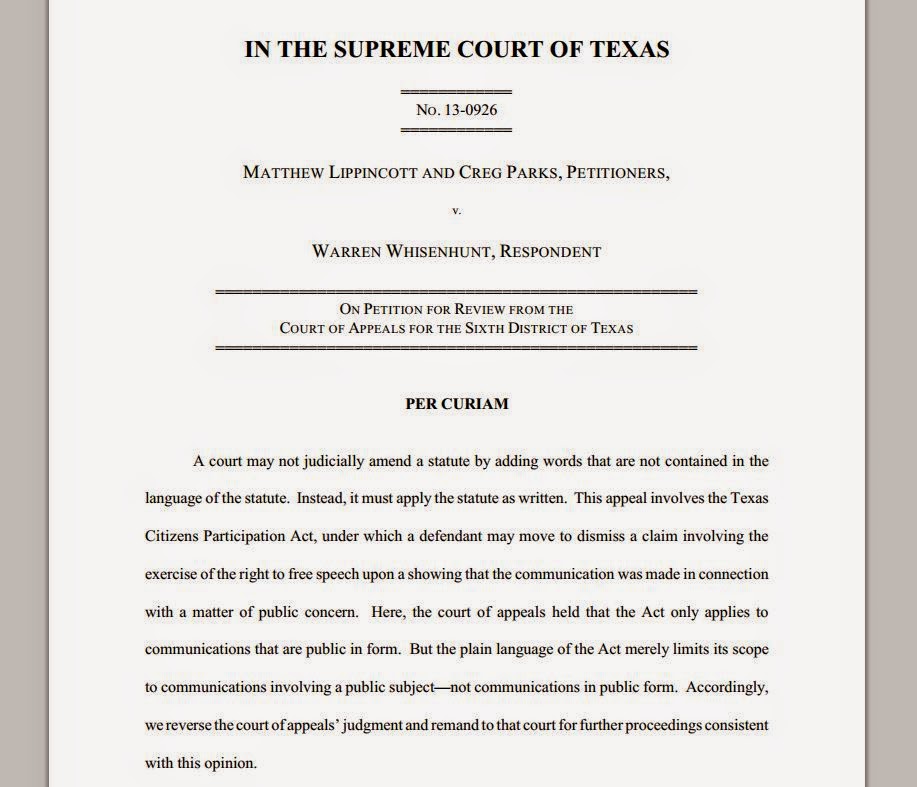 The court of appeals concluded that because the purpose of the Act, as described in section 27.002, includes the phrase “otherwise participate in government,” the Act only protects public communication. 416 S.W.3d at 697.

This statute defines “communication” to include any form or medium, including oral, visual, written, audiovisual, or electronic media—regardless of whether the communication takes a public or private form. TEX. CIV. PRAC. & REM. CODE § 27.001(1). The plain language of the statute imposes no requirement that the form of the communication be public. Had the Legislature intended to limit the Act to publicly communicated speech, it could have easily added language to that effect. See In re M.N., 262 S.W.3d at 802. In the absence of such limiting language, we must presume that the Legislature broadly included both public and private communication. TEX. CIV. PRAC. & REM. CODE § 27.011.