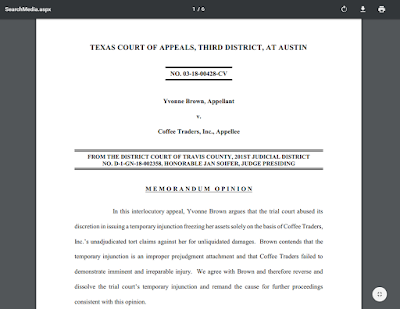 Brown was employed by Coffee Traders as an accounts-payable representative. After Coffee Traders began suspecting that Brown had embezzled over $100,000 in funds, it terminated Brown's employment and sued her for fraud, conversion, breach of fiduciary duty, and violation of the Texas Theft Liability Act. Coffee Traders's petition sought damages, attorney's fees, and a temporary injunction freezing Brown's assets. The trial court issued a temporary restraining order (TRO) enjoining Brown from: (1) disposing of any assets in her name or under her control; (2) accessing any amounts on deposit with any bank unless more than $110,000 remains on deposit, excepting $1,000 for necessities; and (3) injuring or otherwise impairing property in her possession to devalue or make it unsalable.

A temporary-injunction hearing was later held, at which the operations manager, Traci Armstrong, of Coffee Traders testified. Armstrong testified about the company's investigation into the alleged embezzlement and about documentary evidence admitted at the hearing, including checks signed by Brown and made payable to "cash" and falsified invoices, supporting Coffee Traders's likelihood to prevail on the merits of its claims. Armstrong also testified that she feared Coffee Traders would "never get repaid" by Brown because of her dual U.S.-Panama citizenship and Armstrong's belief that Brown had already made significant asset purchases in Panama, including a home and a bakery, and would "move the money" she had misappropriated to Panama, which would make it "very difficult" for Coffee Traders to collect on a judgment.
After the hearing, the trial court awarded Coffee Traders a temporary injunction accomplishing the same purposes as the TRO, except that the court reduced the amount required to remain on deposit to $70,970 after finding that Coffee Traders failed to show $110,000 worth of damages and increased the amount able to be withdrawn for necessities to $2,000 per month. Brown appeals from the trial court's grant of the temporary injunction.

A temporary injunction is an extraordinary remedy and does not issue as a matter of right. Butnaru v. Ford Motor Co., 84 S.W.3d 198, 204 (Tex. 2002); Walling v. Metcalfe, 863 S.W.2d 56, 57 (Tex. 1993). To obtain a temporary injunction, the applicant must plead and prove three specific elements: (1) a cause of action against the defendant; (2) a probable right to the relief sought; and (3) a probable, imminent, and irreparable injury in the interim. Butnaru, 84 S.W.3d at 204; Walling,863 S.W.2d at 57. An injury is irreparable if the injured party cannot be adequately compensated in damages or if the damages cannot be measured by any certain pecuniary standard. Butnaru, 84 S.W.3d at 204. Generally, an adequate remedy at law exists and injunctive relief is improper where any potential harm may be "adequately cured by monetary damages." Ballenger v. Ballenger, 694 S.W.2d 72, 77 (Tex. App.-Corpus Christi-Edinburg 1985, no writ).
A temporary injunction is available to preserve the "status quo of the subject matter of the suit pending trial on the merits." Davis, 571 S.W.2d at 862; Southwestern Bell, 526 S.W.2d at 528. However, the temporary injunction issued here covers all of Brown's assets, which are not directly the subject matter of Coffee Traders's suit. The general rule "prohibit[s] an injunction to secure the legal remedy of damages by freezing a defendant's assets that are completely unrelated to the subject matter of the suit." Texas Black Iron, Inc. v. Arawak Energy Int'l, Ltd.,527 S.W.3d 579, 586 (Tex. App.-Houston [14th Dist.] 2017, no pet.); see Victory Drilling, LLC v. Kaler Energy Corp., No. 04-07-00094-CV, 2007 WL 1828015, at *2 (Tex. App.-San Antonio June 27, 2007, no pet.) (mem. op.) (holding that trial court abused discretion in granting temporary injunction to secure legal remedy of damages by freezing assets unrelated to subject matter of suit); Harper v. Powell,821 S.W.2d 456, 457-58 (Tex. App.-Corpus Christi 1992, no writ) (same); Lane v. Baker, 601 S.W.2d 143, 145 (Tex. App.-Austin 1980, no writ) (same).
The rule holds even when the alleged misconduct rises to the level of an intentional tort or crime, such as embezzlement, and the defendant is insolvent or likely to be insolvent at the time a judgment is rendered. See Nowak v. Los Patios Inv'rs, Ltd., 898 S.W.2d 9, 10-11 (Tex. App.-San Antonio 1995, no writ) (declining to expand general rule to apply to embezzlement case where assets frozen were "completely unrelated" to subject matter of suit); see also Victory Drilling, 2007 WL 1828015, at *3 ("recogniz[ing] that [Plaintiff] presented evidence that [Defendant] will dissipate its assets and become judgment-proof" and, nonetheless, dissolving injunction because frozen assets were unrelated to subject matter of suit). While Coffee Traders may have a claim to some amount of money in damages from Brown, cash is fungible, and Coffee Traders cannot point to any evidence showing a direct link between Brown's frozen assets, including the cash in her bank accounts, and the allegedly embezzled funds.
Although there are exceptions to the general rule, they are inapplicable here. See, e.g., Deckert v. Independent Shares Corp., 311 U.S. 282, 289 (1940) (affirming injunction sought to preserve assets or their proceeds that are subject to pleaded equitable remedy such as recission, constructive trust, or restitution); Butnaru, 84 S.W.3d at 211 (affirming injunction sought to enjoin sale of real property that formed basis of underlying suit); Texas Black Iron, 527 S.W.3d at 587 (affirming injunction where particular drilling equipment sought to be enjoined was basis of contract dispute); Khaledi v. H.K. Glob. Trading, Ltd., 126 S.W.3d 273, 278-79 (Tex. App.-San Antonio 2003, no pet.) (affirming injunction where party seeking injunction has security interest in asset sought to be enjoined).
We echo the reasoning of one of our sister courts: "If we were to uphold the injunction in this case, `it is difficult to see why a plaintiff in any action for a personal judgment in tort or contract may not, also, apply to the chancellor for a so-called injunction sequestrating his opponent's assets pending recovery and satisfaction of a judgment in such a law action. No relief of this character has been thought justified in the long history of equity jurisprudence.'" Nowak, 898 S.W.2d at 11 (quoting De Beers Consol. Mines v. United States, 325 U.S. 212, 222-23 (1945)). Furthermore, as another of our sister courts concluded, "we cannot agree that a plaintiff need show probable right [of recovery] on any cause of action to obtain injunctive relief regarding a defendant's assets . . . . If this were the case, injunctions would usurp the carefully constructed statutes concerning garnishment, attachment, receivership, etc." Alliance Royalties, LLC v. Boothe, 313 S.W.3d 493, 497 (Tex. App.-Dallas 2010, no pet.).

[1] Brown does not support her request with any authority indicating that this Court has jurisdiction to order bond forfeiture under these circumstances and, accordingly, we deny her request.
Posted by MOTP at 5:25 PM

Email ThisBlogThis!Share to TwitterShare to FacebookShare to Pinterest
Labels: temporary-injunction