Chapter 38 attorney's fees for work in trial court and on appeal - How to get them, or rather (not) lose them

An award of attorney's fees in a breach-of-contract action may be mandatory in theory, but that does not mean that entitlement to them under chapter 38 of the CPRC cannot be waived, or that the proof requirements are automatically satisfied. Among other criteria (such as prior presentment), the amount of the fees sought must be shown to be both necessary and reasonable. And that requires competent evidence. Appellate attorneys fees are no exception. 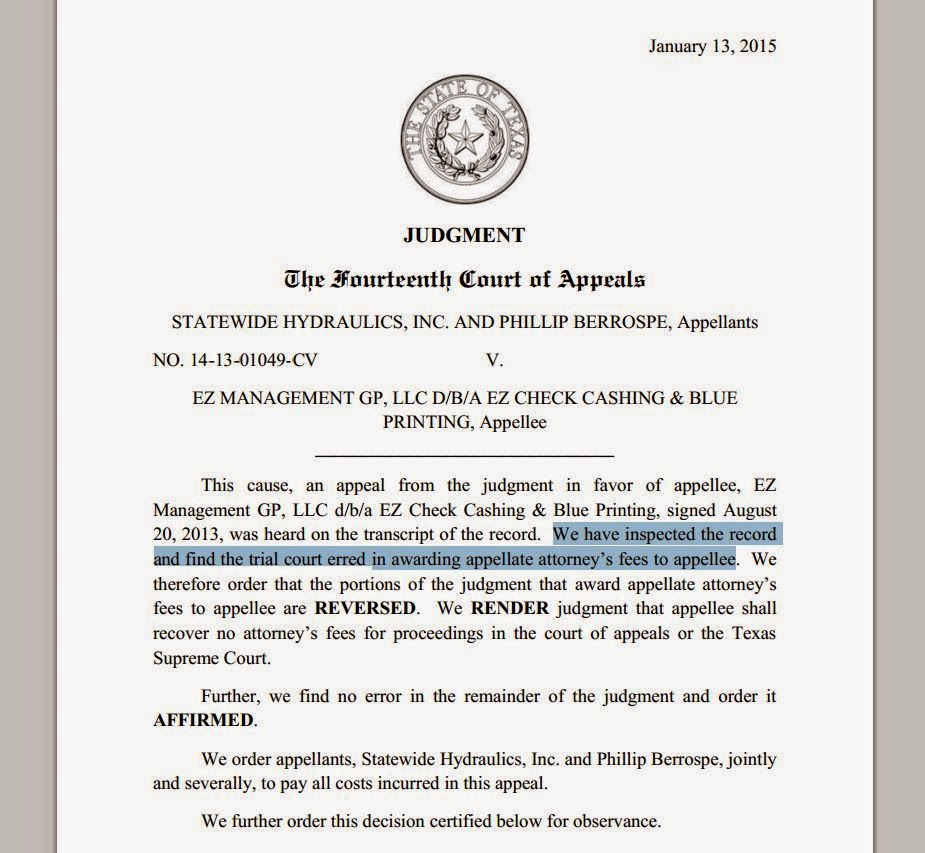 Statewide and Berrospe's counsel testified: "I am familiar with the reasonable and necessariness [sic] of [Statewide's and Berrospe's appellate attorney's fees] in reference to the Arthur Andersen elements."[7]

Counsel, however, did not apply the elements to the facts of this case. Counsel also stated that he had never done an appeal and that he referred appellate work to a colleague. The record contains no other evidence regarding the parties' appellate attorney's fees.

We determine that the evidence is legally insufficient to support the trial court's award of appellate attorney's fees to EZ Management. Statewide's and Berrospe's counsel did not testify regarding specific Arthur Andersen elements. If he had, he could not have testified based on personal knowledge.

Moreover, the testimony of Statewide's and Berrospe's counsel does not establish EZ Management's appellate attorney's fees. See Dilston House, 230 S.W.3d at 718. In Dilston House, we rejected the argument that a trial court must assume reasonable fees for one litigant are the same as those for another where, as here, no evidence supports that assumption. See id. (testifying counsel did not know whether opposing counsel had spent the same amount of energy, time, and money on the case).[8]

The footnotes also contain useful caselaw cites and snippets, including an enumeration of the Arthur Andersen factors:

These factors include (1) the time and labor required, novelty and difficulty of the questions involved, and the skill required to properly perform the legal service; (2) the likelihood that the acceptance of employment precluded other employment by the lawyer; (3) the fee customarily charged in the locality for similar services; (4) the amount involved and the results obtained; (5) the time limitations imposed by the client or by the circumstances; (6) the nature and length of the professional relationship with the client; (7) the experience, reputation, and ability of the lawyer performing the services; and (8) whether the fee is fixed or contingent. Id.

[8] In contrast, in Keith v. Keith, 221 S.W.3d 156 (Tex. App.-Houston [1st Dist.] 2006, no pet.), cited by EZ Management, the court assumed that testimony regarding the reasonableness of appellate attorney's fees applied to both parties where the record showed that both parties' attorneys estimated approximately the same amount of time would be spent on appeal and the attorney to whom the assumption applied charged a higher rate than the attorney who testified regarding his appellate fees. Id. at 170 n.10.

See Bocquet v. Herring, 972 S.W.2d 19, 20 (Tex. 1998) (noting that statutes providing that a party "may recover" attorney's fees are not discretionary); TEX. CIV. PRAC. & REM.CODE ANN. § 38.001(8) (Vernon 1997) (stating that a person "may recover" reasonable attorney's fees, in addition to the amount of a valid claim, if the claim is for an oral or written contract). Therefore, a jury (or judge, at a bench trial) does not have discretion to simply deny an award of attorney's fees if any were properly proven.

The affidavit of ViewPoint's attorney presents the opinion that a lump sum amount is a reasonable and necessary fee for ViewPoint's claims against Allied. The affidavit describes the attorney's experience, recites the factors described in Arthur Andersen & Co. v. Perry Equip. Corp., 945 S.W.2d 812, 818 (Tex.1997), and states the attorney considered those factors. The affidavit gives a brief description of the kinds of work done, then the opinion that $89,000 is a reasonable and customary fee through the filing of the motion for summary judgment, and additional amounts for fees in case of appeal.

However, the affidavit does not state the hourly rates of the attorneys performing the services or the number of hours worked by those attorneys. Allied did not challenge the affidavit or present evidence contradicting the amount of attorney's fees stated in the affidavit.

It is not necessary that the record include evidence on each of the Arthur Andersen factors. See Brockie v. Webb, 244 S.W.3d 905, 909-10 (Tex.App.-Dallas 2008, pet. denied). While documentary evidence is not a prerequisite to an award of attorney's fees, the claimant must present evidence to support a finding that the amount of the fee is reasonable. See In re A.B.P., 291 S.W.3d 91, 99 (Tex.App.-Dallas 2009, no pet.) (documentary evidence not a prerequisite to award of attorney's fees).

Generally, the nature and extent of the attorney's services are expressed by the number of hours worked and the hourly rate. Brockie, 244 S.W.3d at 909. However, there is no rigid requirement that both facts be introduced into evidence to support a finding attorney's fees are necessary and reasonable. Id; Hays & Martin, L.L.P. v. Ubinas-Brache, M.D., 192 S.W.3d 631, 636 (Tex.App.-Dallas 2006, pet. denied). In Hays & Martin, this Court affirmed an award of attorney's fees where the evidence did not include evidence of the number of hours spent working on the case. Hays & Martin L.L.P., 192 S.W.3d at 637. But the attorney in that case testified to the hourly rates of the attorneys working on the case and the complexity of the case. Id. Where a court has the total fee and either the hourly rates or the time necessary for the legal tasks, it can easily calculate the missing term in determining the reasonableness of the fee. See Hagedorn v. Tisdale, 73 S.W.3d 341, 353-54 (Tex.App.-Amarillo 2002, no pet.) (while court did not have total number of hours spent on case by each lawyer, it had means to determine approximate number of hours spent based on testimony as to the total fees and hourly rates of each person who worked on case).

The affidavit of a party's attorney regarding reasonable attorney's fees is expert testimony that will support an award of attorney's fees in a summary judgment proceeding. Ellis v. Renaissance on Turtle Creek Condo. Ass'n, Inc., 426 S.W.3d 843, 857 (Tex.App.-Dallas 2014, pet. filed). And testimony from an interested witness that "is not contradicted by any other witness, or attendant circumstances, and the same is clear, direct and positive, and free from contradiction, inaccuracies, and circumstances tending to cast suspicion thereon, it is taken as true, as a matter of law." Smith v. Patrick W.Y. Tam Trust, 296 S.W.3d 545, 547 (Tex.2009) (quoting Ragsdale v. Progressive Voters League, 801 S.W.2d 880, 882 (Tex.1990) (per curiam)). This is especially true where the opposing party had the means and opportunity to disprove the testimony but failed to do so. Id.; see also Garcia v. Gomez, 319 S.W.3d 638, 641 (Tex.2010) ("The attorney's testimony is not objectionable as merely conclusory because the opposing party, or that party's attorney, likewise has some knowledge of the time and effort involved and if the matter is truly in dispute, may effectively question the attorney regarding the reasonableness of his fee.").

Thus, we have only the total amount of the fee and no way to determine whether the time spent on specific tasks was reasonable or the hourly rates charged were reasonable. Nor does the affidavit indicate the fee was determined on some alternative billing arrangement, such as a flat-fee or percentage of recovery, or whether that arrangement would be reasonable in this type of case.

In Brockie, this Court held the evidence was factually insufficient to support the amount of reasonable and necessary attorney's fees incurred in defending a counterclaim because there was no evidence of the number of hours expended, the hourly rates charged, or the specific services performed. Brockie, 244 S.W.3d at 911. The only evidence regarding the fees for defending the counterclaim was a lump sum amount on another attorney's bill to the client and that attorney's testimony that the fees were reasonable and necessary. Id.

Furthermore, uncontradicted testimony does not mandate an award of the amount claimed in all cases. See Smith, 296 S.W.3d at 547-48; Ragsdale, 801 S.W.2d at 882. "[T]he fee, though supported by uncontradicted testimony, was unreasonable in light of the amount involved and the results obtained, and in the absence of evidence that such fees were warranted due circumstances unique to this case." Smith, 296 S.W.3d at 548.

ViewPoint requested an award of prejudgment interest in its cross-motion for summary judgment. However, the record does not contain the information necessary to determine the amount of prejudgment interest due on the check claim. See Long v. Castle Texas Prod. Ltd. P'ship, 426 S.W.3d 73, 77 (Tex.2014); Johnson & Higgins of Tex., Inc. v. Kenneco Energy, Inc., 962 S.W.2d 507, 531 (Tex.1998) (prejudgment interest begins to accrue on the earlier of (1) 180 days after the date a defendant receives written notice of a claim or (2) the date suit is filed).

ViewPoint failed to establish the amounts of reasonable and necessary attorney's fees or prejudgment interest to which it is entitled. Thus, it is not entitled to summary judgment for these amounts.