Texas Supreme Court: A slip-and-fall in a hospital lobby is not a health-care liability claim. -- Duh! - Comment on Ross v. St. Luke's Episcopal Hospital (May 1, 2015)

The slippery slope on the med-mal front in Texas:
Wet floor not medical malpractice after all

Sadly, a truism such as this passes for exciting legal news in Texas, and beyond. It is an illustration of how abstruse the Texas Supreme Court's rulings have become to justify the high court's resolution of most appeals it agrees to hear in a manner to vindicate the interest of a narrow group of favored litigants, which includes big corporations and health care providers.

The Texas Supreme Court's earlier ruling that a claim against a health care provider need not be a medical malpractice claim to qualify for dismissal as a medical malpractice claim -- thereby effectively granting immunity to doctors and hospitals for all sorts of other claims -- just went too far even for the practicing bar that is accustomed to take its "guidance" from the supreme court; is not allowed to criticize sitting justices; and would be bound by supreme nonsense articulated in precedent-setting opinions in any event, no matter how troubled they may be by it.

The cognitive dissonance and sheer disbelief engendered by the supreme court's pronouncements in its relentless pursuit of judicial tort reform are, after all, an occupational hazard for litigators; -- something that comes with the territory. Texas trial lawyers' BS detectors have to be periodically re-calibrated to avoid overheating when coping with volleys of opinions from the high court that abrogate rights and remedies, deny ordinary people their day in court, and already put many of their peers out of business on both sides of the docket.

The high court has now "corrected" one such supreme nonsense -- nonsense with grave consequences for the rights of injured people because lower courts have to enforce it -- by restricting the earlier ruling to the effect that a med-mal claim no longer needs to involve medical malpractice by announcing a laundry list of factors that may still justify treating a claim against a hospital or doctor as a med-mal claim, with attendant expert report requirement and other procedural hurdles, when the claimant is not a hospital visitor who slipped and got hurt in the facility's lobby.

The latter was the fact scenario in the case in which the supremes have now elevated truism to a new genre of jurisprudence, following a string of legal news of the weird, and subdued griping and whispers of dissension on lawfirm blogs and web sites. Not to mention a law review article politely exposing how "Texas" had gone too far in the medical liability realm. 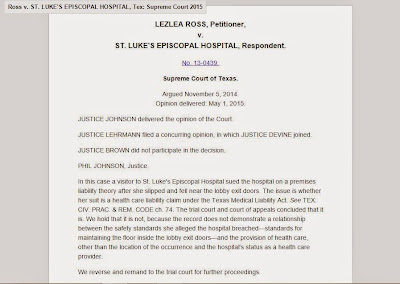 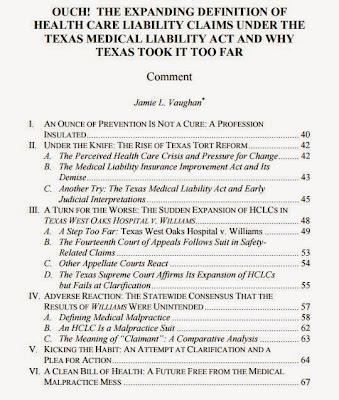 Meanwhile, the Corpus Christi Court of Appeals had ruled that a hospital visitor injured by a sliding door with lateral guillotine functionality -- a plaintiff who like Ross in the supreme court case also was not a patient -- can't pursue a premises liability claim against the hospital because her personal injury claim is a health care liability claim and she did not file an expert report showing how the limb-chopping door violated the applicable standard of medical care. To add insult to injury, the maternity ward visitor struck by the malfunctioning door was told she will have to pay the hospital's attorney's fees.